This film series presents a selection of work by Gregory J. Markopoulos (1928­–1992), who made some of the most subjective and allegorical film poetics in post-war experimental cinema. With four sessions screened in both La Casa Encendida and the Museo Reina Sofía, this series is also the outcome of a collaboration between an extensive international network of arts centres and film institutes which, co-occurring with the publication of the director’s writings, endeavours to review a body of work that joins formal experimentation and individual mythology.

A contemporary of Kenneth Anger, Stan Brakhage and Maya Deren, Gregory J. Markopulos (1928–1992) was born in the USA to Greek emigrants, a sensibility and foreign condition that would underlie his constant trips to Europe from the 1950s onwards, bringing him into contact with Jean Cocteau and establishing a hermetic and narcissistic sense of cultural tradition. After Psyche (1947), his first 16mm film, Markopoulos built his own cinematic space, articulated by biographical narration and the translation and contemporary reinterpretation of mythological, literary and musical sources. This series introduces the keys to sensual and excessive poetics, in which homosexual identity, initiation rites and allegory circle around complex editing techniques and spontaneously superimposed images.

Disillusioned with the possibilities of the post-war Avant-garde and sceptical about the role of institutions, audience and circles of experimental cinema, Markopoulos set out for Europe for good in 1967, withdrawing his films from circulation and, in the process, turning his work into an elusive cult object. With the notion that the film-maker must be responsible for every aspect of their work, he conceived Temenos, a space of pilgrimage and monographic archive to present, restore and study his films, located in Arcadia, Greece, the place of his birth. The culmination of this project can be seen in Eniaios: twenty-two eighty-hour cycles reassembling his work and replacing sound with the mental rhythm brought about by the speed of brief images between black and white passages. Since 2004, this total artwork project has been screened every four years and represents a celebration of cinema. Markopoulos’ life is well documented and continues to resonate with the words he would quote from Mircea Eliade: The whole man is engaged when he listens to myths and legends; consciously or not, their message is always deciphered and absorbed in the end. 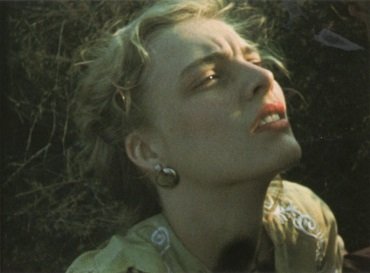 Presentation by Mark Webber, editor of the book Film as Film: The Collected Writings of Gregory J. Markopoulos (The Visible Press, 2014) and independent programmer.

Psyche, Lysis and Charmides make up the trilogy Du sang, de la volupté et de la mort, branded “degenerate” by critics at the time as it openly explored the awakening of homosexual desire in the repressive moral climate of the 1950s. In his first 16mm film, Markopoulos took inspiration from the unfinished novel Psyche, by Pierre Louÿs, which starts and finishes with a door opening and closing ( he goes in a boy and comes out a man ). An inaudible encounter and an illegible letter submerge the viewer in unconscious associations: changing colours on the screen reveal the true character, with psychosexual states (narcissism and homosexuality), erotic symbols and cine-trance (somnambulism, dreams, hypnosis). Assembled with only a magnifying glass, tape and a razorblade, the spine of these films supports a love for places (Hollywood Hills) and people (the actors were chosen because of their appearance and form of expression). Lysis and Charmides, meanwhile, were inspired by Plato’s dialogues on friendship and temperance; filmed in Ohio, both affirm the possibilities of myth in modernity and celebrate a new montage: Lysis is filmed entirely in sequences, practically without discards, while Charmides represents the consistency of film as film. 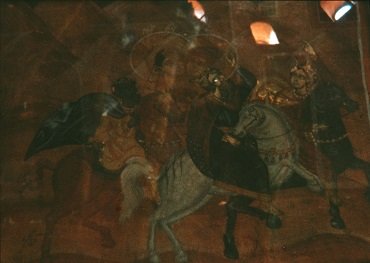 In June of 1967, Markopoulos visited the Byzantine chapel San Juan Bautista on the island of Hidra. Three months later, he returned for the second time to the Castello di Roccasinibalda, which he had become obsessed with in a previous trip to Italy. Bliss and Gammelion stem from two overwhelming places with various limitations: time (1 or 2 days of filming), materials (only two reels in each film) and light (only natural light). In Bliss he selects the first composition (the door of the church) on which he films the subsequent overlaps, cutting and assembling as though the camera were a chisel. In Gammelion, as with the frescoes or the dome in Bliss, he passes through rooms, hallways, walls, and gardens. Markopoulos didn’t film his first screenplay, which was inspired by the surrealist novel Au château d’Argol, since the author, Julien Gracq, refused to give authorisation, considering the project too esoteric. Filming the whole castle in segments of less than 30cms, on the second day he explores some of the same places, taking new shots with the morning light. At the time of assembling the film, he chose to turn these five minutes of footage into a one-hour film, using systematic interstices in opaque white (fade out) and black (fade in), accompanied by a soundtrack with music by Roussel and the verses of Rilke. 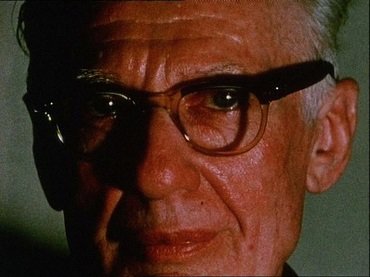 Presentation by Arnau Vilaró, historian, film critic and member of the editorial board of the publication Lumière.

Between two significant portrait films, Galaxie and Political Portraits, Markopoulos filmed the painter and poet Mark Turbyfill over the course of six hours. Through improvisation a definitive form was found in the process itself and in the camera montage. As in Gilbert & George, these portraits do not strive to identify so much as reveal every piece of film as a vessel of continuous time. In Political Portraits, he travelled around Europe to film Chirico and Nureyev: these portraits denote the humanist and complex reverse of Andy Warhol’s Screen Tests. Although the relaxed feel and the rhythm of New York differ in Galaxie, the running time of the portrait still corresponds in terms of rolls of film. At the beginning of the original film Markopoulos read a fragment from Valéry’s L'Homme et la nuit, while, subsequently, in The Olympian he mounted a portrait of Alberto Moravia in his Rome balcony with fades to black. 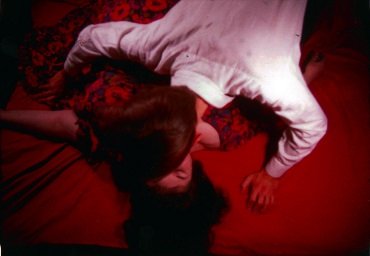 Over the course of his life, Markopoulos returned to Greek mythology time and again. This film, one of his most acclaimed, constitutes a visionary reinterpretation of Prometheus Bound, by Aeschylus, interpreted by new mythical subjects from the North American underground in the 1960s. Narcissus, Icarus, Daedalus, Apollo, Venus and Adonis were erotic starting points to wander through the emotion of certain actors – Jack Smith, Taylor Mead, Gerard Malanga, Gregory Battcock, Paul Swan or even Andy Warhol, who formed a decentralised framework of scenes around Central Park. Bound, freed in different versions, transformed into molecules, these bodies, symbols of desire or opposing binomial, Markopoulos wrote, rhyming with the musicality of chosen lenses or the paused reading of the film-maker in the translation of myth carried out by Henry David Thoreau. The impossibility of making a copy of the first three-hour version is one of the renunciations that resulted in Markopoulos leaving for Europe.