In collaboration with FILMADRID, a new space devoted to contemporary auteur cinema, the Museo Reina Sofía and Filmoteca Española (the Spanish Film Institute) welcome the retrospective Lav Diaz. The Evolution of a Filipino Film-maker, centred upon a contemporary director whose experiments with duration best represent the popular and tragic history of a community. This medium-scale retrospective presents the film-maker’s most recent work; unknown in Spain, it includes the premiere of his latest film, From What It Is Before. The series also incorporates the section “Focos” from the first edition of FILMADRID.

In his films Lav Diaz (Mindanao, Philippines, 1958) treads on a path that is as radical as it is identifiable and intimate. Unyielding and committed, his film work is the outcome of a dazzling blend of intimism and the epic as his view starts out from the concrete, from profound portraits of individuals enveloped in recognisable existential and moral crises, before reaching the collective – the tragic fate of the Philippine people. Thus, his work has been evolving since his debut at the end of the 1990s; a body of work that wholeheartedly spotlights the treatment of cinematic time, in the dialogue between the present and history, as well as the tangible and the immaterial. Shot in the rural areas of the Philippines, his films, often strictly in black and white and sometimes running for up to 11 hours, offer a fragile and precarious fresco of the desolation in the lives of the Philippine people during the period of oppression under Ferdinand E. Marcos. Despite its impossible presence in film theatres, the work of Lav Diaz has not only taken centre stage at international film festivals (Locarno, Rotterdam and Toronto), it has also paved the way for the so-called Philippine New Wave, one of the most recent and decisive film movements, made up of directors such as Raya Martin, Brillante Mendoza and Khavn De la Cruz, among others. 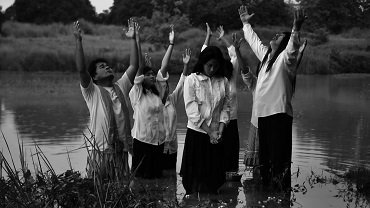 After 10 feature films, in Century of Birthing (2011) Diaz turns the camera back towards himself, or at least towards an analogy of himself: a film-maker called Homer, who is trying to finish a film entitled Woman of the Wind. The different stories comprising the film are a reflection of each other, repeating visual and narrative motifs with complex arrangements, while the characters are taken from reality to fiction and vice versa. In the end the circumstances spread (or deteriorate) in such a way that the torturous experience Diaz went through to finish his film – Woman of the Wind was a real project he never finished – becomes about women “giving birth” to their respective destinies in this difficult six-hour process. It ends with a peasant woman giving birth to an unwanted child after being raped. 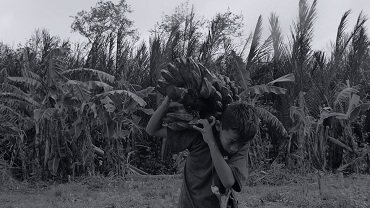 From What is Before [Mula sa kung ano ang noon]

From What Is Before, winner of the Golden Leopard Award in Locarno in 2014, shows how Diaz integrates some of the innovations anticipated in his previous film Norte, the End of History, particularly the predominance of narrative elements over contemplative ones, without renouncing the characteristics which identified his films: the use of black and white, long and majestic sequence shots and the ambition of his story lines. From What Is Before begins in 1970 in a coastal town, a microcosm of the Philippines, where divergent social, political and religious interests converge just before the army take it over. It culminates in 1972, when martial law is proclaimed in the country. 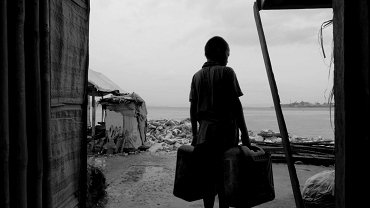 Lav Diaz made this documentary just months after Typhoon Haiyan (known in the Philippines as Typhoon Yolanda) hit the island of Tacloban. The city has not yet been reconstructed; numerous huge stranded hulls spread across the countryside. What has the government done since then? Where is the aid that was promised so unrestrainedly? Half of the film is presented in pouring rain, forcing the viewer to wonder: What will happen when the next typhoon comes?. 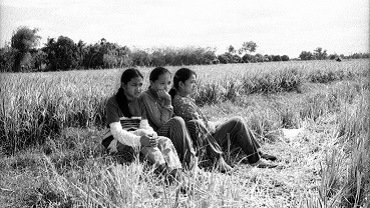 Comparisons could be drawn between Lav Diaz’s Evolution of a Filipino Family (2004) and Novecento (1976), Bernardo Bertolucci’s monumental film depicting the rise of fascism in Italy in the early years of the 20th century. With a running time of 10 hours and 32 minutes, Diaz’s film offers a panoramic view of a decade in Philippine history: the years of the dictatorial government of Ferdinand E. Marcos, stretching from the declaration of martial law to its fall and the arrival of Corazón Aquino in 1986, including episodes such as the Mendiola Massacre, in which police opened fire on a farmers’ protest. An epic story approached with contrast via the intimate narration of the lives of two families and an austere and fragile mise en scène.

Sessions in the Museo Reina Sofía. Sessions in the Filmoteca Española, Cine Doré: Tickets on sale in the Cine Doré ticket office. Ticket office opening hours: from 4:15 p.m., up to 15 minutes after the start of the last session. Price: €2.50