This seminar is the culmination of the exhibition The Return of the Snake. Mathias Goeritz and the Invention of Emotional Architecture and looks to generate a debate centred on the artist Mathias Goertiz as a unique case study with which to understand the phenomena of the translation, reinterpretation and survival of modernity in a new time in history, straight after the war. In a similar vein, together with the seminar Radiations. The Idea of European Art in the Cold War (Museo Reina Sofía, 29 and 30 April), it will introduce the line of research based on the ideas, subjects and life experiences from this time period, which would end in the definition of a new multifocal geopolitical board that is interconnected and far more complex than previously thought by the traditional bipolar history of two antagonistic blocks confronting one another.

The seminar pivots around the concept of “emotional architecture”, put into circulation for the first time in 1953 when the artist opened his Museo experimental El Eco in the Mexican capital. Above and beyond the idea of construction present in a building’s structure, Goeritz’s concept of emotional architecture lead to spaces of recontextualisation in art disciplines, establishing a dialogue between mural painting and sculpture in an anti-functionalist architectural environment. Furthermore, Mathias Goeritz advocated a renewed blueprint of work that traversed the idea of traditional collaboration, favouring instead mechanisms of friendship, exchange and creative loans (the best example being the triad formed by Goeritz, the engineer and architect Luis Barragán and the collector, antiquarian and painter Jesús Reyes Ferreira), in addition to the expanded notion of patronage, which allowed the exponential joining of sensibilities and resources, materialising in works that, while fuelled by historical avant-garde tradition, lead to productions that stood on their own and stood outside the canons of the traditional history of art in central metropolises.

Paula Barreiro. Professor in the Department of Art History at the University of Barcelona. In 2013 she co-directed the international conference Transatlantic Encounters: Avant-garde Discourses in Spain and Latin America in the Museo Reina Sofía. Her publications include, among others, Globalization and Art in the Twentieth Century (Third Text, 2013) and Crítica(s) de arte: discrepancias e hibridaciones de la Guerra Fría a la globalización (Critique(s) of Art: Discrepancies and Hybridisations from the Cold War to Globalisation) (Cendeac, 2014), recently co-edited with Julián Díaz Sánchez.

Francisco Reyes Palma. Art historian, critic and researcher at the National Centre for Research, Documentation and Information on Plastic Arts at the National Institute of Fine Arts, Mexico. A founding member and president of CURARE. Critical Space for the Arts. He is also the author of Mathias Goeritz (La Caja Negra Ediciones, 2011), and numerous other works, and curator of the exhibition The Return of the Snake. Mathias Goeritz and the Invention of Emotional Architecture (Museo Reina Sofía, 2015). Chair person and moderator.

Felicity Scott. Associate professor of architecture and director of the programme in Critical, Curatorial and Conceptual Practices in Architecture at the Graduate School of Architecture, Planning and Preservation from the University of Columbia. She is also a founding co-editor of the journal Grey Room and author of Architecture or Techno-Utopia: Politics After Modernism (MIT Press, 2007), as well as multiple articles in exhibition catalogues and magazines such as Artforum and Texte zur Kunst. 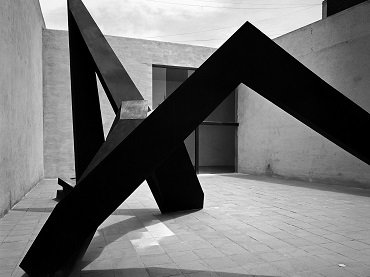 The Artist and his Double. Mathias Goeritz: Personal Mythology, Strategies of Power and the Cold War

Chus Tudelilla
Mathias Goeritz in Spain. A Simulator of Identities

How do we approach the figure of Mathias Goeritz, an artist in constant motion, moving from Germany to North Africa, and then to Spain; or who, after choosing Mexico as his most stable base of operations, also spent time in the USA and Israel? These nomadic wanderings ran in parallel to reflect a figure in a permanent state of biographical reinvention. Goeritz’s time in Spain can be addressed as a counterpoint to his Mexican experience, and without refraining from inscribing him in the global issue of abstraction and the Cold War. Among the question marks over method and archive there is also the unravelling of his logbook of work, devised to confront the post-war period (the production of intimacy that conceives an artistic figure and transforms personal history), followed by the study of his vast international network of epistolary interconnections, akin to the Internet today but dispersed among scores of private archives from his correspondence. 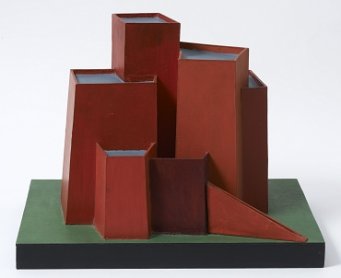 The Centrality of the Margin. Emotional Architecture as a Decentred Creative Mechanism

This second session aims to delve deeper into the mechanism of emotional architecture and impress it upon the international architectural debate in the second half of the twentieth century. For Mathias Goeritz Mexico was a strategic place for doing the impossible; his plan to access the centre from the so-called edges proved to be a fruitful strategy. In this process he delineated his experiment on emotional architecture, stretching it over a number of decades and, on more than one occasion spreading it over local borders in the media. Emotional architecture introduced the idea of design as a primordial component, effectively transforming modes of artistic production and certain principles of repetition and saturation inspired by the media and which had an affect on its influence. Yet it was his stockpile of multidisciplinary and undisciplined visions would materialise to form a critique of spatiality within the modern canon and would be one of Goeritz’s main contributions. 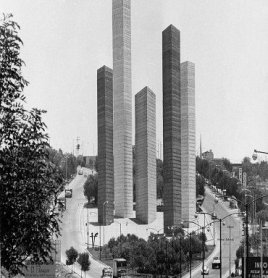 Participants: With participation from João Fernandes and Fernando Huici, alongside the author.

The Torres de Ciudad Satélite (Towers of Satellite City) form a sculptural ensemble of five triangular prisms of different colours and sizes, displayed on an esplanade in the north of Mexico City.

This ensemble is one of the most distinguished works by artist Mathias Goeritz and architect Luis Barragán  – awarded the Pritzker Prize in 1980 – in collaboration with painter Jesús Reyes Ferreira. In this volume, Fernando González compiles vast graphic material expounding the social and cultural value in a work that would become an artistic epicentre in the 1960s, adding accounts and personal documentary to the history of its construction.

Organised by: The Mexican Embassy, The Mexican Institute in Spain, and the Mexican Study Centre UNAM-Spain, in collaboration with Museo Reina Sofía, within the framework of the seminar Mathias Goeritz. Activating Space. An Art of Commotion.